STUDY TOUR TO KENYA FOR FARMERS’ AND LOCAL GOVERNMENT REPRESENTATIVES TO ENHANCE FARMER LED MANAGEMENT OF THE IRRIGATION SCHEMES OF MUBUKU II IN KASESE DISTRICT, DOHO II IN BUTALEJA DISTRICT, TOCHI IN OYAM DISTRICT, NGENGE IN KWEEN DISTRICT AND WADELAI IN PAKWACH DISTRICT 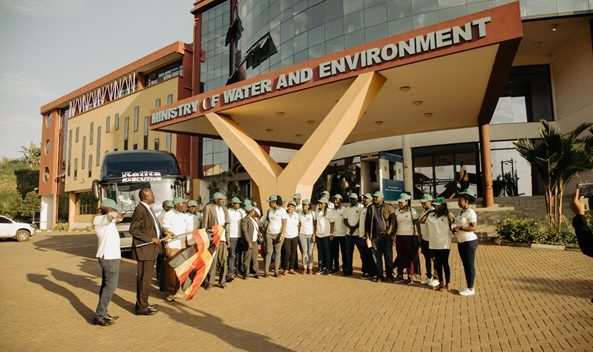 THE REPUBLIC OF UGANDA

MINISTRY OF WATER AND ENVIRONMENT

Uganda with financial support from the African Development Bank (ADB), is in its final stages of implementing construction of the five (5) irrigations schemes of Mubuku II in Kasese District, Doho II in Butaleja District, Ngenge in Kween District, Tochi in Oyam District and Wadelai in Packwach District under the Farm Income Enhancement and Forestry Conservation (FIEFOC) Project II. The aim of the project is to contribute to poverty reduction and livelihood improvement for the rural population. The overall project objective is to improve farm incomes, rural livelihood and food security through sustainable natural resources management and agricultural enterprises development.

The Ministry of Water and Environment appreciates the importance of study tours for key stakeholders such as farmers’ representatives (some model farmers and leaders), district officials and the implementing teams to expose them to agricultural practices.   The study tour would expose the farmers from the irrigation schemes and district stakeholders to different agricultural practices in other irrigation schemes and also equip them with knowledge and understanding on financial management, operating and managing an irrigation scheme.  Thus, enabling farmers to adapt to commercial agriculture.

It is recognized and appreciated that the Government of Kenya is increasing irrigation development by adopting modern irrigation technologies and strategies, especially through climate change adaptation strategies such as solar-powered irrigation systems and rainwater harvesting.

The Participants from Uganda

The targeted participants were 96 distributed in the following categories;

The Southern Africa Development Institute (SADI) was selected to organize and facilitate the above study tour. SADI was also meant to coordinate all the tour activities and programs to ensure the delegation meets the intended goal of the study tour.

Activities conducted during the tour.

The irrigations schemes visited by the delegation

The Workshop held the Vic Hotel

The work was held at the Vic Hotel in Kisumu County and lasted two days, the participants included the Uganda delegation, officials from both Kisumu County Government and from the National irrigation Authority of Kenya, the representatives from the value chain development partners like Nyabon Enterprise and Kilimo Trust, it also included selected scheme leaders from irrigation schemes like Ahero and West Kano.

Opening remarks from Guest of Honor (Hon. Minister of Agriculture)

The workshop was officially opened by the Minister of Agriculture, Irrigation, Fisheries and Livestock of Kisumu County, Hon. Kenneth Onyango who welcomed all the Ugandan delegates and other participants to Kisumu.

The Minister assured the team that Kisumu County had a very hospitable community   and that there was more to learn from other than rice growing.

He noted that in the near future, he expected Kenyan farmers to also make exchange visit to Ugandan schemes that would enable them acquire more experience and skills in farm management.

The hon. minister then wished the participants fruitful deliberations and declared the workshop officially opened.

Facilitators during the workshop

He is an Agronomist with (Ahero Irrigation scheme), he requested participants for their expectations and fears during the tour.

Expectations of the participants

Mr. Odiambo noted that Kenya had fairly established irrigation schemes, and that the two main schemes in western region, that is Ahero and West Kano were being managed by the Government of Kenya through National Irrigation Authority (NIA). Here water for irrigation was being pumped from Lake Victoria and regulated by the NIA.

The meeting also learnt that there were equally privately owned irrigation schemes that were being managed and operated communally. The out growers heavily relied on gravitational floor over a long distance (up to 20km) to supply water for irrigation.

It was further noted that most of the communal schemes obtain their water from River Nyando and has an apex body mandated to distribute water to the various out grower schemes (48No.) having a potential of 15,000 acres with over 8,000 acres in active production.

The production was being done in phases/seasons for proper water scheduling and regulation.

The 48 schemes were all divided into 3 sub-sectors that is i) upper scheme, ii) middle scheme, iii) Lower scheme. The representatives from the different sub-sectors form the Board.

The board had a secretariat who were in charge of the day today activities of the schemes, together with scheme leaders who made sure the canals were taken care off, so as to supply enough water to the schemes.

The schemes had water user associations which consisted of experts that ensured there was adequate water supply to the different schemes.

It was also noted that there existed other partners like Nyabon Enterprise Ltd which provided agronomic support to the farmers like farm equipment.

The workshop then was taken through the question-and-answer session, where all participants were urged to ask about anything they would wish to understand, as indicated in the table below;

Table 1. Questions and responses by the participants

Ahero Irrigation Scheme is located in Kisumu County, western Kenya, it was constructed in 1969 and regarded as one of the pioneer schemes Kenya. It began with an average of 2168 acres of land with originally 519 farmers and each farmer was allocated 4 acres then.

The scheme receives water from R.Nyando  and shares the same management with West Kano irrigation scheme that is The National Irrigation Authority (NIA, There is an inlet pump to store water, and later supplied to farmers through gravity due to flat topography of the area. The major crop grown is rice due to the area being semi-aquatic.

Currently, the area comprises of 30 farmer groups with each farmer having half an acre due to division of land by the families.

The area comprises of 13 Blocks that is from block A to M and the water supply schedule is done per block which ranges from 150 – 200 acres of land.

The Water User Association which is in charge of water management decides which block gets water first. The block that is at the furthest point to the water source gets first and those close to the water source receives last, this was intended to allow continuous production and to sustain the available market by ensuring constant supplies.

The outer canal serves the community with water for domestic use.

The current production of rice was said to be 38,000 metric tons per season with major exporters being Uganda.

The major crop grown in this scheme is rice but other crops were being produced as well such as legumes for example beans, peas and these help to boost farming in the area and also improve the fertility of the soils.

There’s power on site to run the system. The area has 3 pumps which are 750mls each.

The electricity cost is 350 million Kenya shillings per year.

The area has 3 groups that form the Scheme Management Board that is;

The Scheme Management Board decides who was legible to use the water.

The Irrigation Board also ensures that there’s no obstruction of the flow of water.

The delegation also learnt that there was a subcommittee called the Land and Dispute Resolution Board that ensures sanity on the scheme by resolving conflicts over land and other irrigation scheme related grievances.

It was also noted that the Cooperative Body was in charge of marketing and to ensure that production was carried out throughout the year to sustain the market.

The team further noted that National Irrigation Authority provided support to the scheme in different ways such as;

The scheme is more than 4,000 acres and spreads within entire Nyando Sub County.

It majorly uses gravitational flow and the source of water is R.Nyando which is relatively permanent and this helps with continuous production.

The major crop grown is rice. The different varieties of rice seeds planted are Komboka (which is mostly used), pichora

This scheme is communally owned and managed by the farmers

Here farmers are grouped in 3 clusters for a uniform supply of water and production that is cropping at different stages so that production takes place the whole year.

The scheme gets support from the Government in form of trainings, maintaining of the canals, providing quality seeds. However, there are other existing bodies that work along with the schemes for example the National Irrigation Authority which helps to design structures for irrigation.

More so, the scheme works with private bodies such as NYABON Enterprise Limited which provide loans to the farmers for land preparations and also supply fertilizers on credit.

The farmers further suggested that the Ministry of Water and Environment organizes a recap meeting for all stakeholders that travelled for the tour to discuss and consolidate what was learnt and come up with the recommendations.

The CAO thanked the Government of Kenya and particularly Kisumu County for the good reception given to the Ugandan delegation and pledged for the same once Kenyan farmers come Uganda.

She thanked the scheme leaders and farmers of Kenya, for all the much-needed support rendered to the visiting, adding that this was an indication we could work together to sustain the ever-growing market in East Africa.

She noted that the team had learnt a lot from the tour and therefore would send the message to those other stakeholders who didn’t make it to Kenya.

The madam CAO informed the delegation that Ministry of water and Environment was one of government agency that operate in a very unique and transparent manner where stakeholders and farmers in particular are given priority.

She urged the farmers to return to their schemes and apply the skills and knowledge they acquired and concentrate on increasing production.

Tweets by https://twitter.com/TrainingSadi
Need Help? Chat with us
Start a Conversation
Hi! Click one of our member below to chat on WhatsApp
The team typically replies in a few minutes.
Batsile Mokodue
Programmes Administrator
Stella M Ogema
Programme / Operations Director